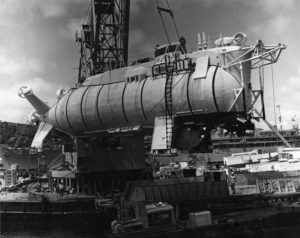 Trieste II (DSV-1) was the first deep submergence vehicle (DSV) built by the U.S. Navy and the successor to the original Trieste bathyscaphe. Trieste II performed undersea research and tasks, including examining the remains of USS Scorpion in 1969. Information gathered from operating and overhauling Trieste II helped design its replacements, the Alvin-class submersibles.

The first Trieste was designed and built by Swiss physicist and inventor August Piccard in 1952. In 1957, the U.S. Office of Naval Research purchased Trieste and assigned it to the Naval Electronics Laboratory, San Diego (now the Naval Ocean Systems Center). The most significant of the many scientific programs Trieste participated in was Project Nekton, which sent it on a 35,800-foot descent into deepest part of the world’s oceans, the Challenger Deep. For this series of dives, Trieste’s original 20,000-foot Sociète Terni-built sphere was replaced by one manufactured by the Krupp Works of Germany designed for operation to 36,000 feet. In 1963, Trieste took part in the search for Thresher; during this effort, a new float assembly was installed and the vehicle was redesignated Trieste II.

The bathyscaphe was retired in 1964. Some of its parts were recycled into the new Trieste II the Navy built as its successor. The Naval Electronics Laboratory in San Diego heavily modified the original Trieste design plans for the creation of Trieste II and constructed it at Mare Island Naval Shipyard. The Terni pressure sphere original to the first vessel was installed as the new Trieste II’s sphere. Auxiliary repair drydock USS White Sands (ARD 20) was appointed the vessel’s support ship.

In the fall of 1968, Trieste II was certified for an operating depth of 12,000 feet; a year later, it investigated the Scorpion wreckage, completing nine dives over 10,000 feet deep to survey and photograph the remaining debris. Its Integral Operating Unit, consisting of Trieste II, White Sands, and support ship tug USS Apache (ATF 67) received a Navy Unit Commendation for this effort. Up until this point, Trieste II had been classified as equipment in the Navy inventory, but in September 1969, it was officially placed in service and given the hull number X-1. Two years later, following an overhaul, it was redesignated DSV-1 and certified to 16,500 feet the next year. For being the first submersible to retrieve objects from such a great depth, Trieste II received a Meritorious Unit Commendation.

White Sands and Apache were decommissioned in 1974; a dock landing ship was renamed USS Point Loma (AGDS 2) and converted into Trieste II’s new support ship. Point Loma’s modifications were complete in early 1977, and during training dives with Trieste II, the bathyscaphe was certified to 17,250 feet. Later that same year, its operating depth was increased to 20,000 feet. Trieste II remained in active service in the Pacific Fleet through the early 1980s. It was given permanent leave from the Navy in 1984, earmarked for the U.S. Naval Undersea Museum in 1985, and moved to the museum in 1987 for permanent installation.